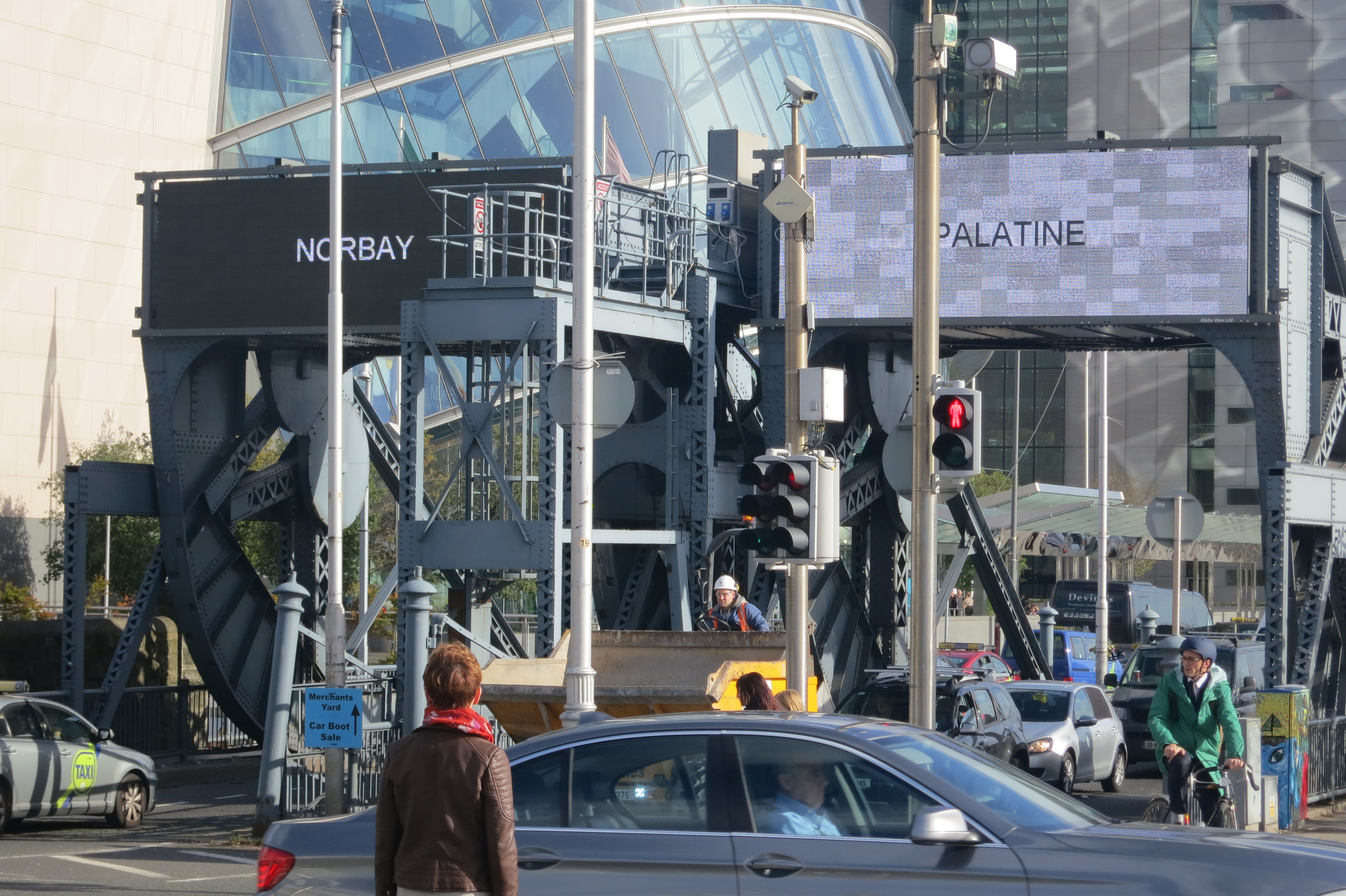 Gabriel Gee: New forms of maritime representations have appeared in the second half of the 20th century. In the past fifty years, with the adoption of containers, port cities have gone through dramatic changes. Your work ‘Dublin Ship’s (2015; Dublin) articulates a reflection on these changes and their effect on the contemporary urban landscape of port cities.

Cliona Harmey: Dublin Ships has been designed so it could be seen by commuters over an extended period of time at a busy inner city intersection. There are six thousand cars that go down there a day, it’s very busy, and it’s part of the redeveloped docklands, the docklands were in a derelict state in the 1980s. Now it is in the heart of google and twitter, who have settled their headquarters close to that part of the river. The structure which supports the signage panels is an old Scherzer bridge. It was used to speed up water traffic, before it was installed it took something like half an hour to let a barge go through (quayside traffic was stopped), this bridge reduced that to a few minutes. Hence it is in a way linked to speed. It is obsolete now and not used anymore but is a heritage structure.

For Dublin ships we also have a live Twitter feed and that has been very popular. People are quite active, possibly because of the comic effect caused by the superposition of words and weird juxtapositions caused by putting the two shipnames together

.
The signs are temporary. The sign on the right is more pixelated now than it was at the beginning, so you can see elements of the underlying structure (i.e that its made up of panels/parts). It’s not ideal, but in someway it contributes to showing the existing connections between a number of different systems. There is the display system, then a also where information is retrieved through an antenna, it is then sent to the internet, it is translated back in to an image... There are various chains, forming an assemblage. And occasionally it breaks as well!

CH: I have a key and there is a box which I can open and reset. It’s strangely analogue, as well as digital. There is a very complex system running behind shipping transportation.

GG: The works is temporary. What is its life span?

CH: It was installed in February, and it’s due to be taken down at start of December. It was initially due to be in place for 6 months, but was extended by 3.

GG: Names of ship carry with them associations; for instance, if one looked at the names of the French nineteenth century company Les messageries maritimes servicing routes to Asia, North Africa, or South America, a certain imagined vision of the other comes through. But what about these contemporary names that appear on your panel in central Dublin?

CH: The politics of names are problematic. Names reveal power structures and histories, but there is also a poetic quality that comes through the systematised naming processes of companies. I suppose many of the names have a certain type of bravado that links to certain aspirations/politics. By pairing them with another word a different set of relations can come into effect .

GG: What role has the port authority of Dublin played in the making of the work?

CH: They part-funded the work. It’s been a symbiotic relationship. They got a lot of publicity out of it, and we couldn’t have made it without their funding. I know that there are very complicated politics behind container shipping, the work is also about flows of information, and a form of generative writing as well.

G.G: Did you come up with a proposal for that specific site?

C.H: No, I came up with a proposal for the work. I had made a smaller version of the work a few years ago for a gallery. And it was only running using a timetable, say it was two o’clock, whatever boat that was due then would be indicated. It wasn’t exactly real time. This one is real time, we use a small antennae, which is close to a mountain, it receives signals and sends them to a database. We trade the information with a company, which supplies information to shipping businesses and enthusiasts. So it’s all these different parts set together, in some ways it’s quite fragile, and a reason why it is temporary, although a lot of people want to keep it as well.

G.G Containers are a symbol of global fluxes, have you thought of installing the work somewhere else?

CH: I suppose when I made it I thought it could be interesting to have it in Rotterdam, or say Singapore, or Hong Kong, somewhere where the traffic is busier. In Dublin there is maybe three four ships every hour, so the panels are static a lot of the time. I like the slowness of it, but it could have a very different tempo somewhere else. The first gallery version was a prototype. The town where I grew up was the home town of the shipping captain who laid the first transatlantic cable [James Halpin], on the ship the Great Eastern designed by Brunel and launched in 1858. I was making a work loosely based around that narrative. The scale of that piece was completely different. So when the city council launched a call for projects entitled Interaction and the City, I proposed a scaled up, live and publicly sited version of that work.

GG: have you explored these historical references in other works?

CH: Not really, though history is often in the back of my mind especially related to technical developments. I used to do underwater recordings of ships, you get these huge sounds from the shipping. That is actually why I originally used the timetables. There is an amazing pier or sea wall near Dublin port, it used to be the longest sea wall in Europe so I suppose it has a link to engineering history. I used to go there to record the ships coming in. That’s how I started, and I did some research on the ships’ names, I didn’t find a lot of information.

GG: Is there an archive where a possible order might be observable?

CH: Yes, the twitter feed (twitter dublin ships) has them all, many thousands. The thing is that if you look at the work everyday, you notice that some names are always there, ‘oh it’s European endeavour again’ , or ‘Jonathan Swift is in’, Jonathan Swift has almost imprinted itself into the sign as it is so frequent. Sometimes the last ship in is the first ship out, and you get a weird loop. From talking to people at port they also mentioned the fact that shipping companies often use naming systems maybe related to an alphabet, to trees, animals, places or birds.

GG: Are you pursuing other strands of interconnections?

CH: I’m also interested in satellites. You can receive satellite flows from the sky with an antennae. They have to be positioned right according to a timetable. It’s kinda of a nerdy thing, but I find the physical act of capturing such information interesting, and I have looked at planes, I did a piece where I have an antennae, and whenever a new plane comes into the airspace, the signs changes. It’ s more of a gallery work. There are callsigns and even flight numbers are historically related to the telegraph and stations. So communication is what I am interested in I suppose, and the ways through which to make certain types of information more concrete.