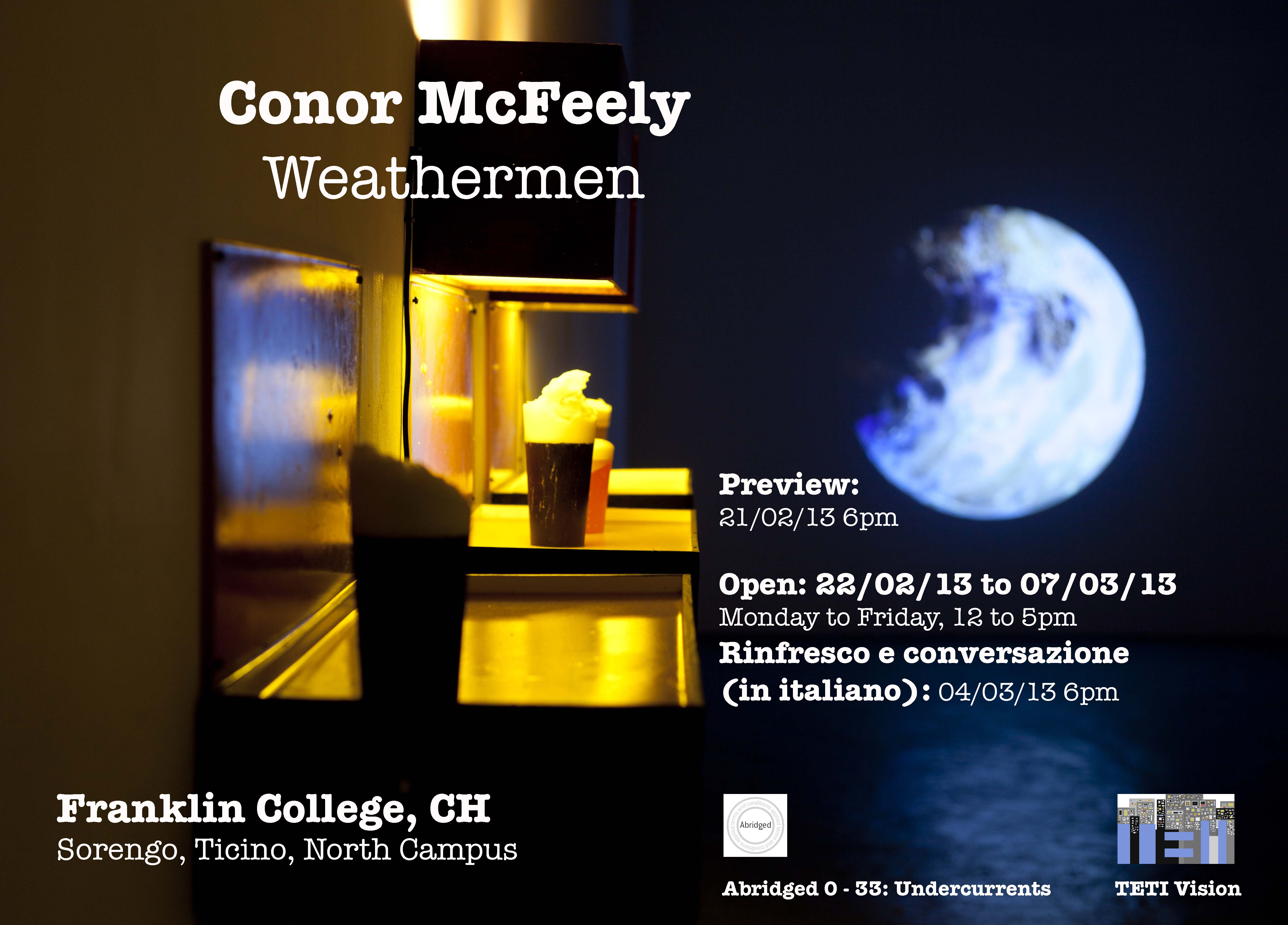 “There was a depression over the Atlantic, it was travelling eastward towards an area of high pressure over Russia and showed no tendency to move northwards around it”.

The opening words of Der Mann ohne Eigenschaften (The man without qualities), Robert Musil’s 1930 unfinished opus, provides a resourceful point of entry to the ongoing variations of Conor McFeely’s present installation: Weathermen. The words point towards a series of recurrent preoccupation in the artist’s mind, which are proposed as objects of contemplation as much as reflection to the viewer in the Weatherman pieces: language, essence and alteration.

Conor McFeely’s installation at Franklin College, Lugano, is loosely divided in three parts, which can be perused separately but should also be considered in connection to one another. In the first room, the visitor is greeted by a view above a mercurial pint’s top. The video captures within the perfect and immovable circle of the glass a changing array of forms and magical/chemichal visions. The circle as a historical and longstanding symbol of the cosmos circumscribes an explosive movement of Heraclitean fluxes.

In the second room, the visitor is invited to consider a number of photographs, including the figure of the artist disguised as a medical practitioner holding a stethoscope. Directly across the room, this evaluating figure finds its nemesis in the unscrutable determinacy of the bomb carrier. Both are framed within the objectifying grid of science, together with the shamrock, the cloth that protects the self, the last pint that (sceller) his resolution and the pervasive mysteries of the Irish landscape.

All these components find themselves folded within the video piece located in the third space, in a room without windows whose roots lay deep in the outside world. The images are shot in Derry. Over the rooftops, one sees the rapid and distant fluxes of vehicles, the still landscape of Northern Ireland and the changing patterns of nature in the sky above. In the courtyards, underneath the rooftops, tactics might well be devised in secrecy. Here the Derry landscape and history connects with the global world. The title of the installation refers specifically to the weathermen, the clandestine American revolutionary party of the 1960s and 70s. There lingers something somehow of their violent endeavours. Waves browse the stratas of the surrounding environment. They also allude to past world conflicts as the depression over the Atlantic stretches towards Russia. Embedded forms and sounds exert both an interaction and dissociation effect to be perused by the viewer. What is there to be known? How can it be known? What course of action shall prevail once answers to these questions have been proposed? Symbols emerge throughout but their exact attributes and function remain veiled. Still, it is the moment(s) of transition that Weathermen aims to capture, in their mercurial quality.

Bio: Conor McFeely was born in Derry N.Ireland, where he now lives and works. He has exhibited both nationally and internationally. His exhibitions include “Disclaimer”, Orchard Gallery Derry 1997, (solo). “Ink Mathematics”, The Mappin Gallery, Sheffield (solo). “Headfirst”, OBG Gallery Belfast 2003, (solo).The British Art Show 5, Hayward Gallery London, touring Edinburgh, Southampton, Cardiff and Birmingham 2000-200. “Small Steps, The Elipse Gallery,Washington DC, 2001. “Something Else”, Contemporary Art from Ireland, touring Turku, Helsinki, Ouulu, Joensuu Finland, 2003. “Hidden Dips” MCAC Portadown 2005 (solo). “Dogs Have No Religion” Czech Museum of Fine Art Prague, 2006. He is a recipient of The Curated Visual Arts Award 2007 (curated by Mike Nelson) resulting in two major solo shows of new work called “The Case of the Midwife Toad (the unrepeatable experiment)” in The Douglas Hyde Gallery Dublin 2007 and at Void, Derry 2008, and “The Testing Rooms/Smashing Forms” a site specific audio and video installation at The Maze Prison 2008. In May 2010 he had a major one person exhibition at The Ormeau Baths gallery Belfast. He has held an AIR residency at NKD, Dale Norway working on the ”Weathermen” project to be shown in 2012 and 2013.

His practice incorporates a wide range of processes, from the ready –made to sculpture and installation as well as photography, video and audio. A fracturing and maniplulation of ”material” in the service of finding new relationships is a chief characteristic of his practice. Often conceived as multi-layered in terms of their reading, many works have been driven by ruminations on the nature of individual free-will, choice and autonomy. Contexts and source material reflect interests in a history of counter culture, literature and social contexts.

He also is a member of the Void Gallery curatorial board (www.derryvoid.com/) and member of the board of Directors of the Context Gallery Derry (www.contextgallery.co.uk/)