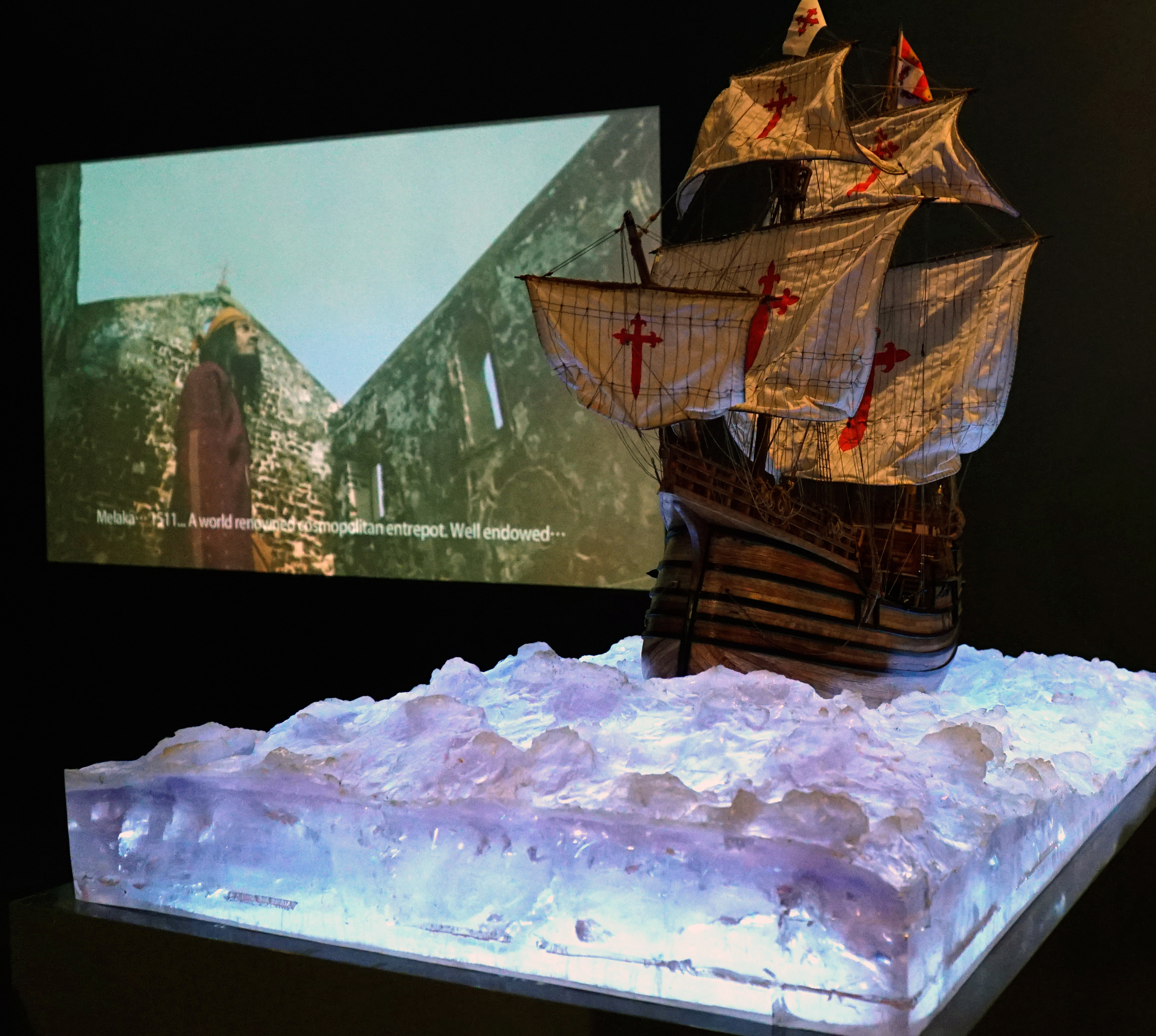 courtesy of the artist @Ahmad Fuad Osman 2016 Gabriel Gee: Your work on the navigator Enrique de Malacca comprises different mediums (Enrique de Malacca Memorial Project , 2016); it explores history and questions of historiography at the crossroad between Southeast Asian and Europeans encounters. You do so through both objects and images, including paintings Ahmad Fuad Osman: First of all, it’s a memorial, a quite typical memorial, with paintings, sculpture, artifacts, documents, prints and objects in vitrines. The whole installation is anchored by a main video entitled ‘Imago Mundi’. The narrative of the whole story, the history of Enrique is narrated in this video. It’s easier for people to understand the whole context of the work if they watch the video from beginning to end. The whole work is a mixture of facts and fictions; it’s not totally factual. I reproduced some of the artefacts and reimagined some. Then I also included real 16th century objects within the same space. The work is also informed by my own experience. Almost every time I enter a museum I have this feeling, this suspicion regarding the objects in the museum: are they real? You look at the objects, notice how beautiful they are, how pristine, and then see that they are dated to the 11th 12th century. You start to have this doubt. It became one of the elements that I wanted to share with the public, to experience this uncertainty. Because history as you know really depends on who writes it. It’s like editing a video or film, you have so many footages, but you only choose some specific footages that really fits your narrative. Written history could be compared to this process. 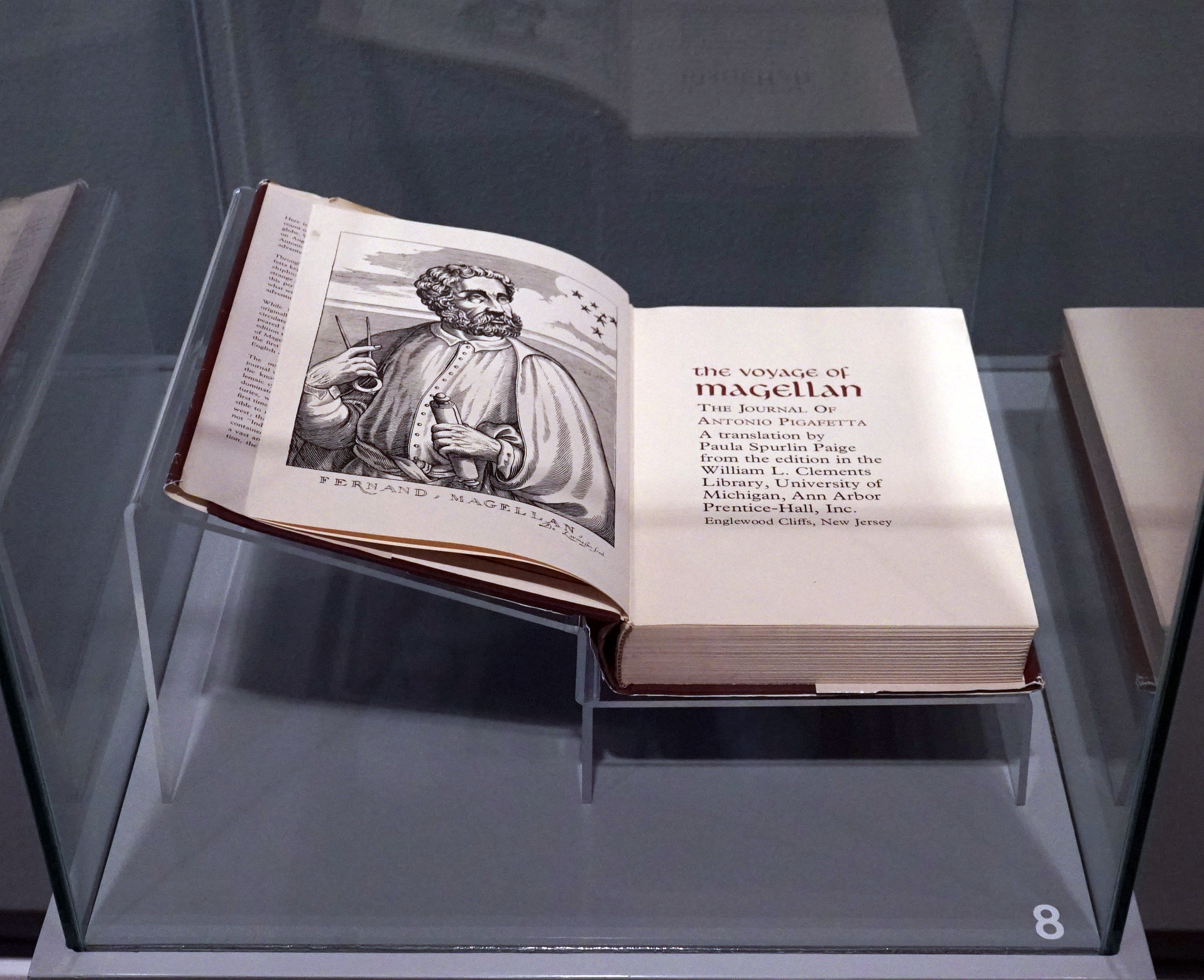 courtesy of the artist @Ahmad Fuad Osman 2016 Enrique de Malacca, what we know of him was that he is from this archipelago, Nusantara. But there are lots of other things about him that we’re not really sure of to this day. Even his real Malay name. What really happened to him after Magellan died and the massacre in Cebu in 1521? Where is he originally from? Indonesia, Malacca (Malaysia today), or the Philippines? These countries are still claiming him as their own, as an important figure who could possibly be the first to circumnavigate the world. Magellan is often associated with the first circumnavigation of the world, but not many people know that he was killed in Mactan, the Philippines. So, in school we were taught that the first man to circumnavigate the world is Ferdinand Magellan, he was the great navigator. And, this guy, Enrique, I like to call him an accidental navigator, maybe he was also really good, as one of the sea people. He had all these skills but not the intention of going circumnavigating the globe. Malacca had fallen to the Portuguese in 1511, he was one of the captured prisoners of war or perhaps a slave… We don’t know how they got him, whether Magellan already knew that Enrique was good at navigating and knew the way around and intentionally chose him or he was just randomly chose. We don’t know. But Magellan took him back to Portugal, became his loyal assistant, and they were together everywhere, to Morocco, then Spain. In 1519, the Armada de Molucca started its journey back from Spain in search of a new route to the Spice Islands. Since he is from the Malay Archipelago, Nusantara, once the ship reached the Philippines through the western route in 1521, he could potentially be the first man to complete the full circumnavigation of the world. But even so, for me I’m not really interested in claiming who was the first, that’s ok, but I am more interested in the missing link, the void in between those few written histories, small and personal stories about Enrique, Magellan and the voyage and also the counter claims amongst the Philippines, Malaysia and Indonesia. As an artist, unlike historians, those small spaces and missing links open up so many possibilities where I can explore, re-imagine, and propose another way of looking at things . This is how the work came about. The work was commissioned by Singapore Museum, for the Singapore Biennial in 2016. This was the first exhibition of the work. G: This is a statue of Enrique, what is it made of? FO: I would have liked to have it made in bronze, but in part it was a budget question, and second there was a handling problem. For a permanent museum, bronze is perfect, but this is a temporary exhibition, most probably it will be a mobile exhibition too and I don’t think it’s a good idea to have a very heavy and hard to handle piece; this one is made of fiberglass resin, with a bronze finish. 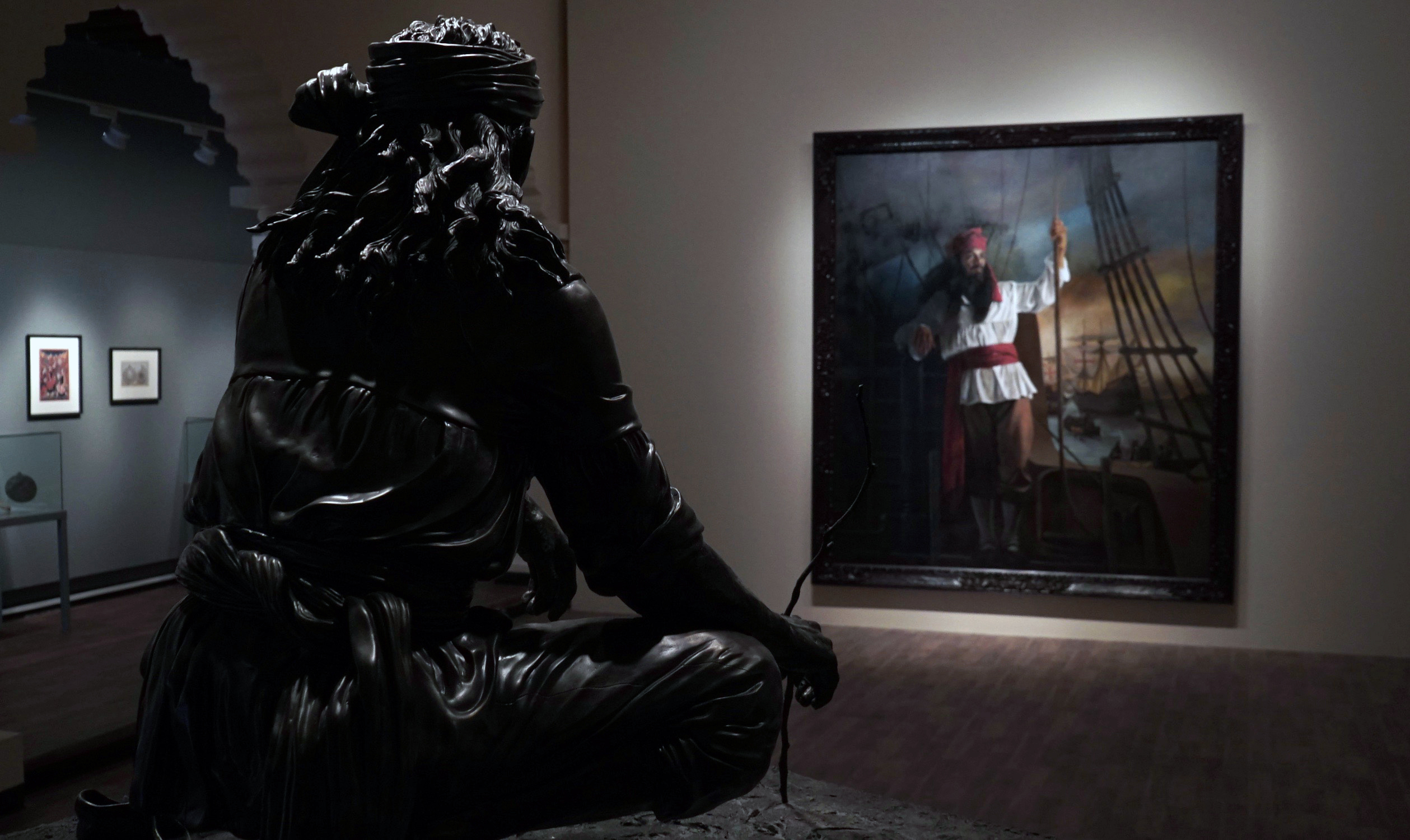 courtesy of the artist @Ahmad Fuad Osman 2016 G: The sound was made for the exhibition? FO: Unfortunately not. It’s just in the main video. I thought of having a special design sound to give an immersive experience as you entered the memorial but it didn’t materialise at that time. Maybe I should work on it again for the next show. The work was conceived as a museum, but I don’t want to call it a museum, as it sounds too big for me. Given the limited time frame given to me for the production, I could not really deliver the work in a museum scale, so I called it a memorial instead, and it became a bit more personal and intimate I guess. G: The interstitial space suggests and exploration of alternative narratives. FO: It is indeed an alternate narrative, an alternative history. Gee: It also conveys a reflection on museology, and strategies through which we narrate the world. The photographer Allan Sekula in one of his last projects, the Dockers’ museum, presented artifacts he had collected related to the sea, to workers experience of the sea, sailors, people working in container ships. It stands in an in-between, revisiting Marcel Broodhaerts’ the Museum of modern art, Department of Eagles from the late 1960s, creating a sort of meta-museum, a museum about museum. FO: I heard or must have read about Sekula’s work somewhere. It sounds very interesting but I haven’t really got a chance to get to know his project deeper which I wished I’d do in the near future. By the way, have you seen Orhan Pamuk’s ‘Museum of innocence’ in Istanbul? Of course it’s totally different in context. It is based on his book, his novel, with the same title. From what I understand, while he was writing the novel, he was already conceiving the idea of having the real museum with the characters in the book. I went there and liked the museum. It’s totally personal and fictional, but within this fictional museum, you still have the traces of real history, of Istanbul, it’s beautiful. I like it. 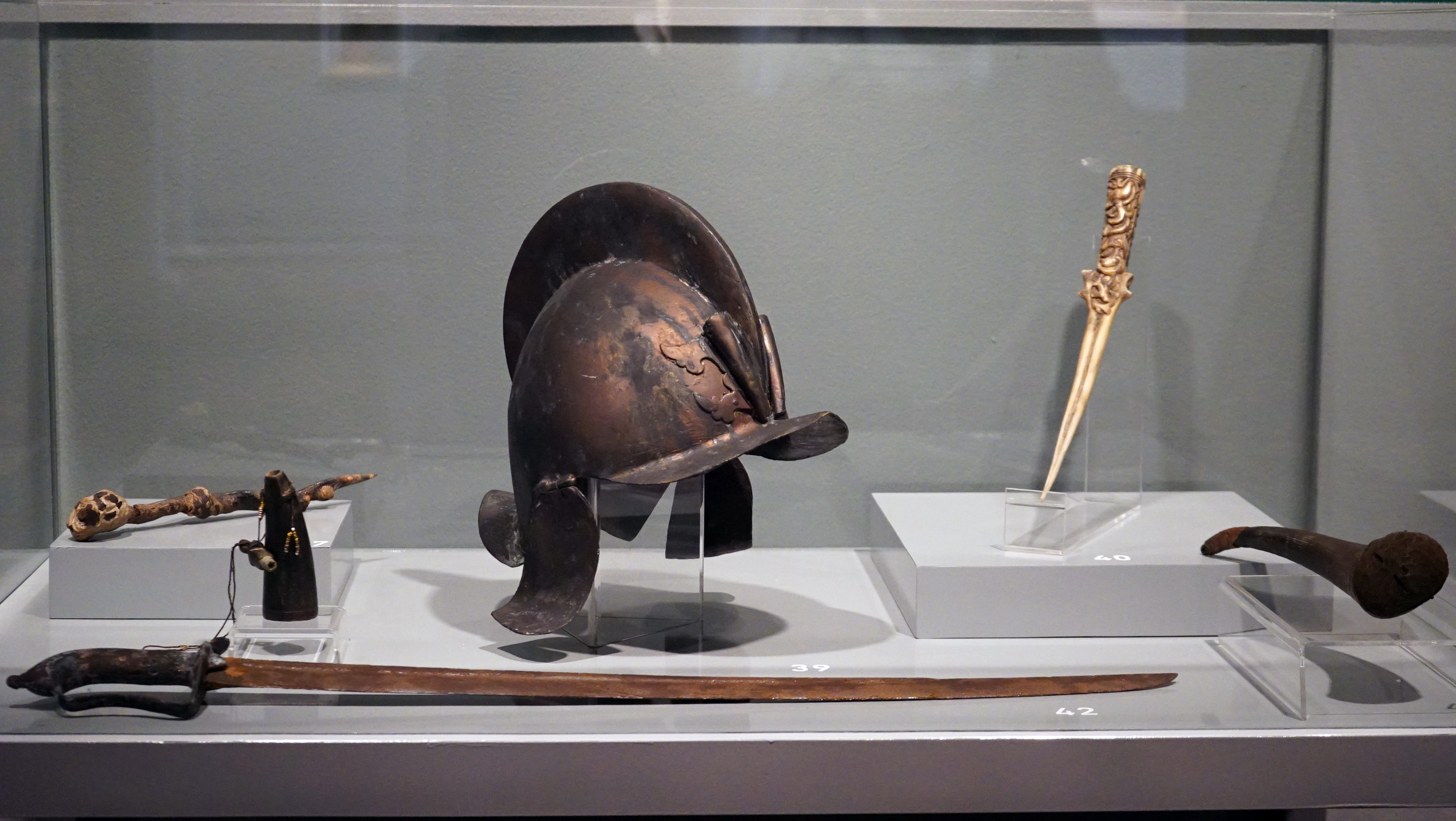 courtesy of the artist @Ahmad Fuad Osman 2016 G: How about the artifacts? The objects. Do you make them? FO: Some of them yes, based on the period, the 16th century. I try to copy original materials, to get as close as possible to the originals. I also collected some objects during my research, because I went to the three countries which are claiming this guy, Malaysia, Philippines and Indonesia. During my journey I managed to find and acquire some artifacts from Cebu, Jakarta, Maluku and Melaka (Malaysia)… They represent all three countries. In some of the captions I didn’t state the provenance, and whether the objects are a reproduction or not. I want to reclaim this blurry line between fact and fiction. People don’t know if it’s real artifact or not. If we declare it, the illusion is gone. Even in a real museum, it often happens that the origins of some objects are only described as unknown. For an artist it is an opportunity to explore the more rigid territory of the historians, which makes things more interesting. If you look at these objects here, these are reproductions, such as this sword. While these are real coins from the 16th century, and this small celadon was from the 13th century. This is a real canon ball. It’s really mixed up. This is a real shield but only about 200-300 years old, Magellan’s fleet arrived in Cebu (Philippines) 200 years earlier, but the style is still almost the same. I got this one from Cebu, Philippines, this is the type of weapons they used to fight with and which killed Magellan. For the sculpture of Enrique, how to portray him? An interpreter who never would have thought of being part of Armada de Molucca’s historical voyage? I put him down in a squatting pose. I didn’t want him to be standing like in a typical monument because in the Armada de Molucca’s context, he was just an accidental navigator. If I had put him standing proudly like a real navigator, which he is probably not, it wouldn’t do! I just had to put him down in this humble pose and more grounded. I wanted to highlight him but not as a typical heroic navigator figures such as Magellan, Columbus or Cook. He is different. All these aspects have to be taken into consideration. 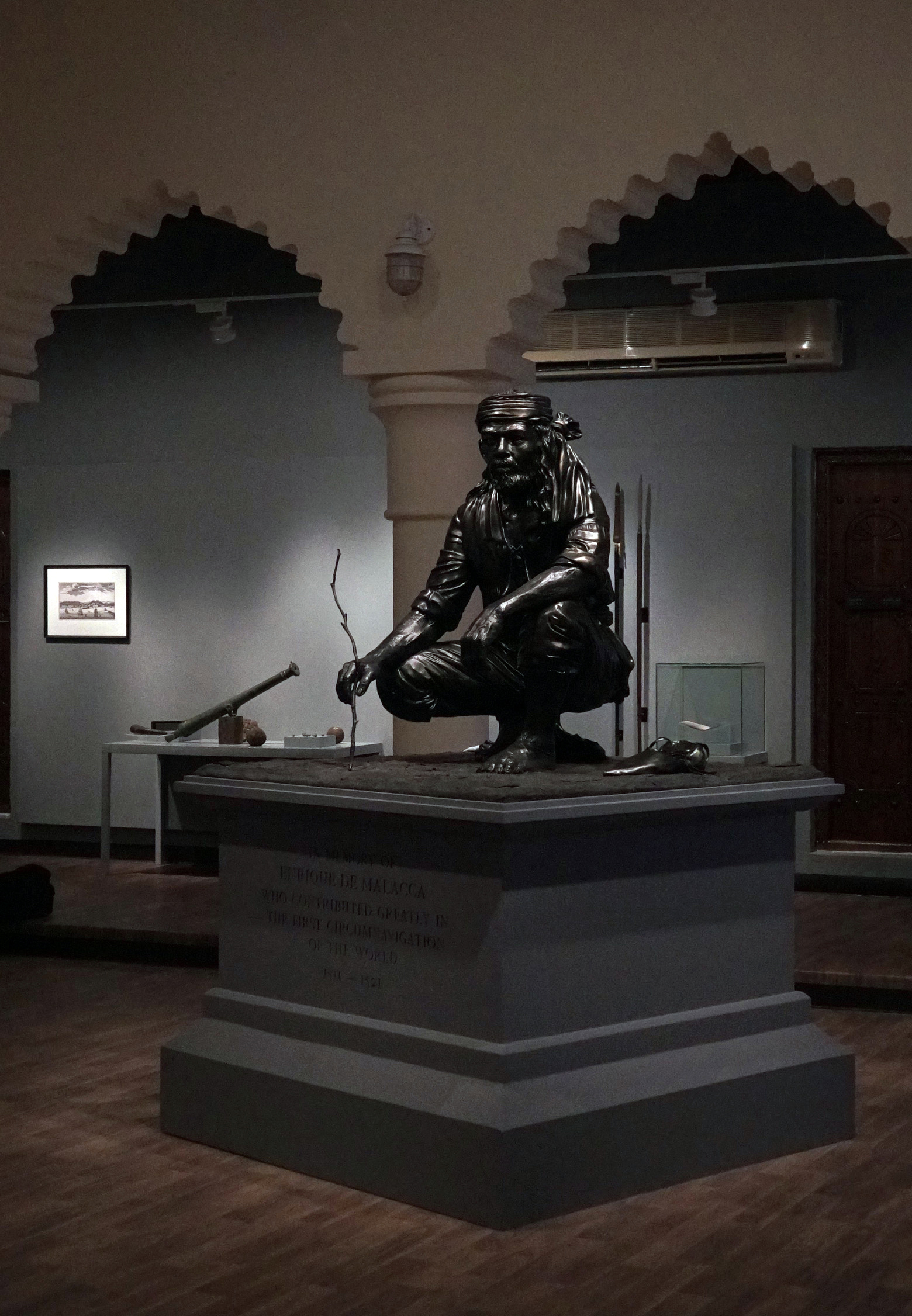 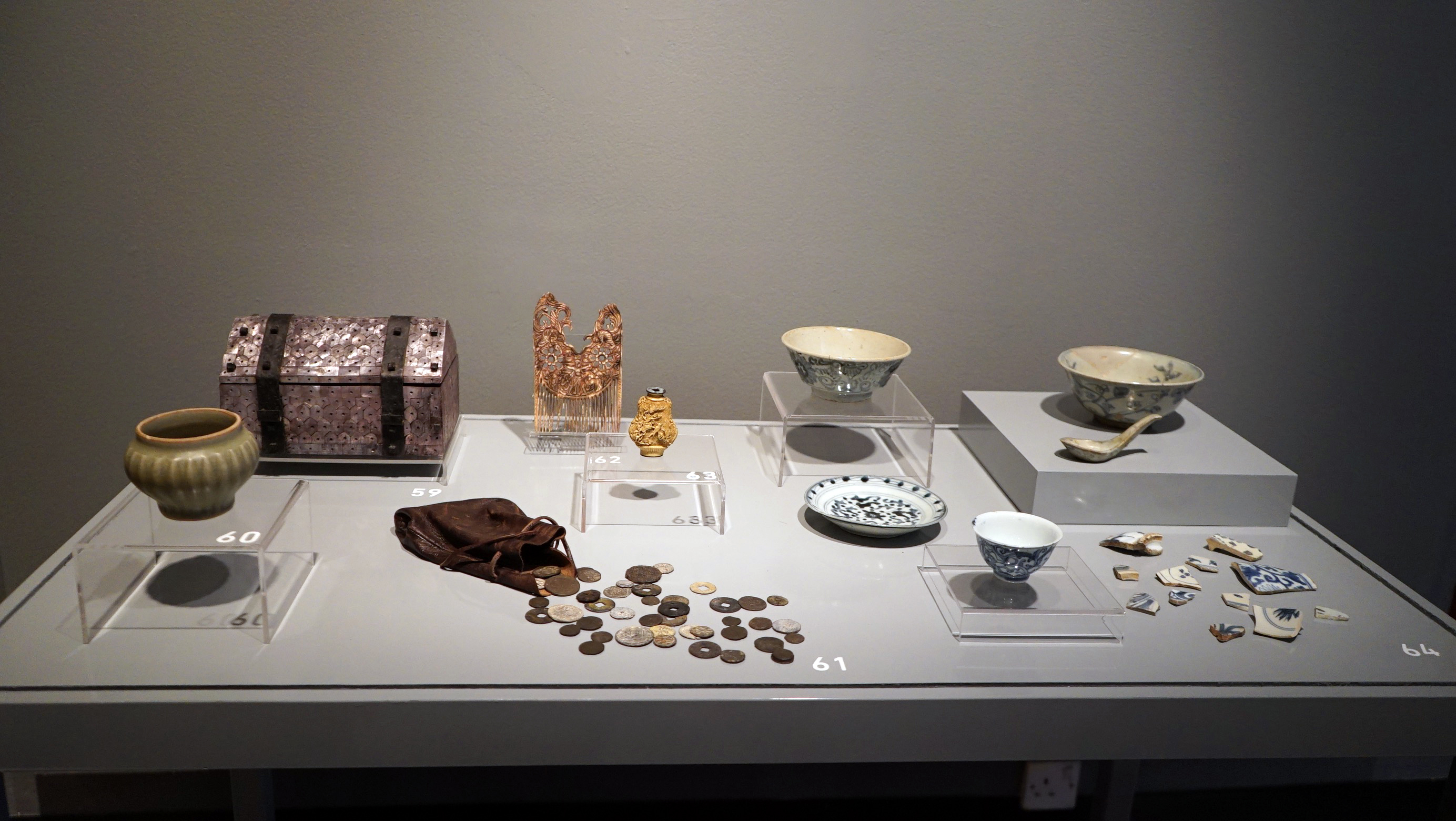